Franz Nicolay & Adam Wilson -- Someone Should Pay For Your Pain & Sensation Machines -- ONLINE!

Someone Should Pay for Your Pain by Franz Nicolay follows singer-songwriter Rudy Pauver, his conflicted relationship with a successful former protégé, and a young niece who wants to travel with him and 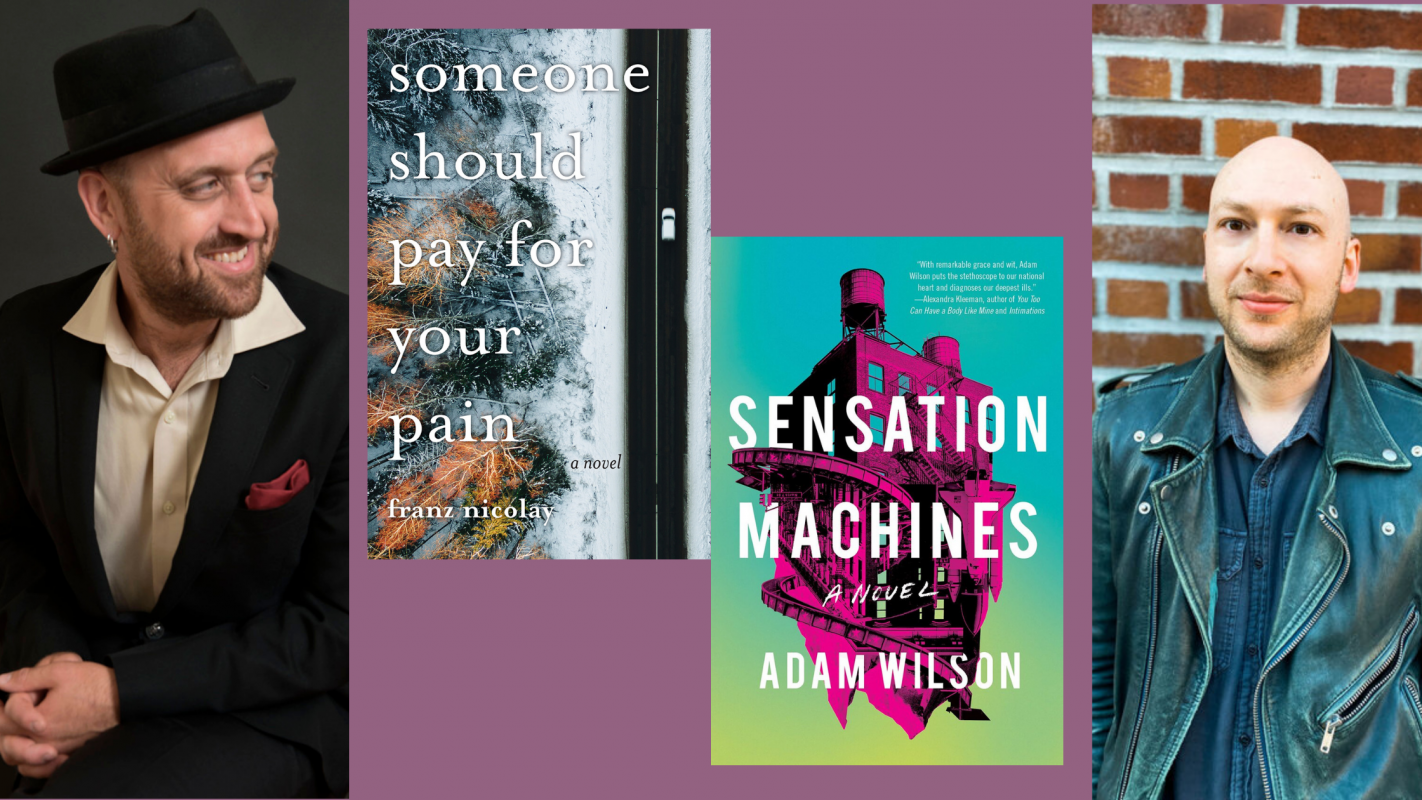 whose surprise appearance forces a reckoning with himself and his past. In the doldrums of a career as a cult figure, singer-songwriter Rudy has been overshadowed by Ryan Orland, to the point where Rudy is now identified as an imitator of the younger man. Ryan is generous and supportive of Rudy, but Rudy finds it hard to be grateful. Forced to confront the limitations of his own talent and ambition, his resentment triggers a confrontation that ends in their estrangement. When Rudy’s niece, a teenage runaway who admires the freedom of his lifestyle, turns up asking to join him on the road, he has to come to terms with the nature of his obligation to family and accountability for his past.

Franz Nicolay's writing has appeared in The New York Times, Slate, The Paris Review Daily, The Kenyon Review Online, the Los Angeles Review of Books, Ploughshares, Threepenny Review, LitHub, Longreads, and elsewhere. He has taught at UC Berkeley and Columbia University, and is currently a lecturer at Bard College. His first book, "The Humorless Ladies of Border Control: Touring the Punk Underground from Belgrade to Ulaanbaatar," was named a “Season’s Best Travel Book” by The New York Times.

Michael and Wendy Mixner are a Brooklyn-based couple whose marriage is failing in the wake of a personal tragedy. Michael, a Wall Street trader, is meanwhile keeping a secret: he lost the couple's life savings when a tanking economy caused a major market crash. And Wendy, a digital marketing strategist, has been hired onto a data-mining project of epic scale, whose mysterious creator has ambitions to solve a national crisis of mass unemployment and reshape America's social and political landscapes. When Michael's best friend is murdered, the evidence leads back to Wendy's client, setting off a dangerous chain of events that will profoundly change the couple--and the country. Set in an economic dystopia that's just around the corner, Sensation Machines is both an endlessly twisty novel of big ideas, and a brilliantly observed human drama that grapples with greed, automation, universal basic income, wearable tech, revolutionary desires, and a broken justice system. Adam Wilson implicates not only the powerbrokers gaming the system and getting rich at the intersection of Wall Street, Madison Avenue, Silicon Valley, and Capitol Hill, but all of us: each one of us playing our parts, however willingly or unwillingly, in the vast systems that define and control our lives.

Adam Wilson is the author of the short story collection What's Important is Feeling and the novel Flatscreen. His stories have appeared in The Paris Review, Tin House, and The Best American Short Stories, among other publications, and Flatscreen was a National Jewish Book Award finalist and an Indie Next Pick and was translated into German and Italian. Wilson has taught in the creative writing programs at Columbia and NYU. He lives in Brooklyn with his wife and son.

Someone Should Pay for Your Pain (Paperback)

Someone Should Pay for Your Pain by Franz Nicolay follows singer-songwriter Rudy Pauver, his conflicted relationship with a successful former protégé, and a young niece who wants to travel with him and whose surprise appearance forces a reckoning with himself and his past.

The Humorless Ladies of Border Control: Touring the Punk Underground from Belgrade to Ulaanbaatar (Hardcover)

In 2009, musician Franz Nicolay left his job in the Hold Steady, aka the world's greatest bar band. Over the next five years, he crossed the world with a guitar in one hand, a banjo in the other, and an accordion on his back, playing the anarcho-leftist squats and DIY spaces of the punk rock diaspora.

A razor-sharp, darkly funny, and deeply human rendering of a Post-Trump America in economic free fall

“OMFG, I nearly up and died from laughter when I read Flatscreen. This is the novel that every young turk will be reading on their way to a job they hate and are in fact too smart for.” —Gary Shteyngart, author of Super Sad True Love Story

Event Summary:
Someone Should Pay for Your Pain by Franz Nicolay hits the backroads with singer-songwriter Rudy Pauver as he navigates a conflicted relationship with a successful protégé and the unexpected arrival of his spirited young niece.