Jason Chin--The Universe In You: A Microscopic Journey

Jason Chin, winner of the Caldecott Medal for Watercress, dives into the microscopic building blocks of life in this companion to the award-winning Your Place in the Universe. 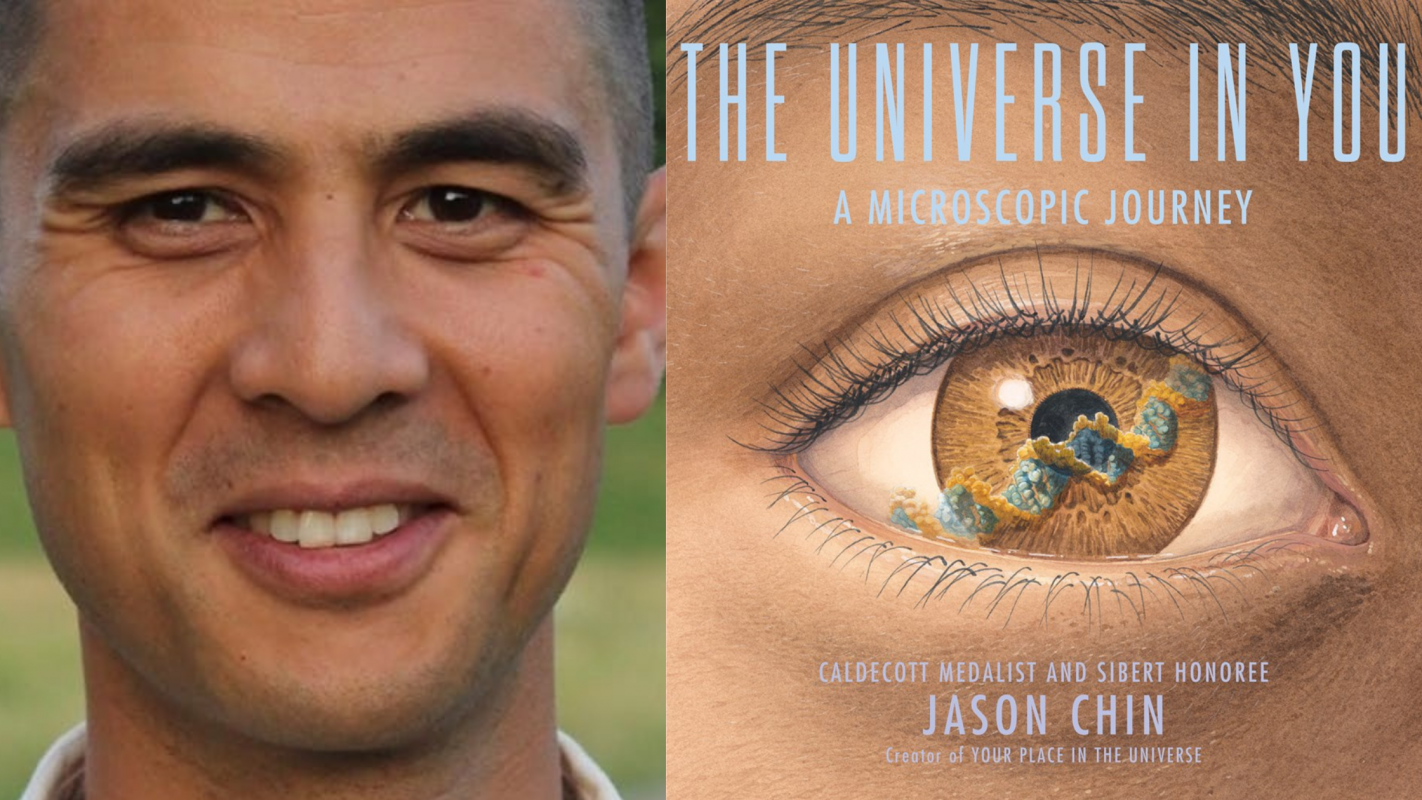 In Your Place in the Universe, Jason Chin zoomed outward, from our planet, solar system, and galaxy to the outer reaches  of the observable universe. Now, Chin reverses course, zooming in past our skin to our cells, molecules, and atoms, all the way down to particles so small we can’t yet even measure them.

Like its companion, The Universe in You is a mind-boggling adventure that makes complex science accessible and enjoyable to readers of any age.

Impeccably researched, wholly engrossing, and with extensive backmatter for additional learning, The Universe in You is another knockout from the award-winning creator of Redwoods, Grand Canyon, and other distinguished works of nonfiction for young readers.

Jason Chin is a celebrated author and illustrator of children's books. He received the Caldecott Medal for his illustrations in Andrea Wang's Watercress, a Newbery Honor book and APALA award winner. His book Grand Canyon was awarded a Caldecott Honor, a Sibert Honor, and the NCTE Orbis Pictus Award. His other acclaimed nonfiction titles-- Coral Reefs, Redwoods, Gravity, and Island: A Story of the Galapagos--have received numerous starred reviews and other accolades. He is also the illustrator of Stephanie Parsley Ledyard's debut title Pie Is for Sharing and Miranda Paul's Water is Water and Nine Months: Before a Baby is Born, the latter a Boston Horn Globe Honor Book. He lives in Vermont with his wife and children.

The Universe in You: A Microscopic Journey (Hardcover)

Jason Chin, winner of the Caldecott Medal for Watercress, dives into the microscopic building blocks of life in this companion to the award-winning Your Place in the Universe.

Your Place in the Universe (Hardcover)

Winner of the Cook Prize!

A story about the power of sharing memories—including the painful ones—and the way our heritage stays with and shapes us, even when we don’t see it.

What keeps objects from floating out of your hand?
What if your feet drifted away from the ground?
What stops everything from floating into space?
Gravity.

Jason Chin's Redwoods tells the story of a boy who discovers a book about redwoods and finds himself in their midst as he turns the pages.

An ordinary train ride becomes and extraordinary trip to the great ancient forests.

Island: A Story of the Galápagos (Hardcover)

Charles Darwin first visited the Galápagos Islands almost 200 years ago, only to discover a land filled with plants and animals that could not be found anywhere else on earth. How did they come to inhabit the island? How long will they remain?

Coral Reefs: A Journey Through an Aquatic World Full of Wonder (Paperback)

During an ordinary visit to the library, a girl pulls a not-so-ordinary book from the shelves. As she turns the pages in this book about coral reefs, the city around her slips away and she finds herself surrounded by the coral cities of the sea and the mysterious plants and animals that live, hunt, and hide there.

Event Summary:
Jason Chin, winner of the Caldecott Medal for Watercress, dives into the microscopic building blocks of life in this companion to the award-winning Your Place in the Universe.