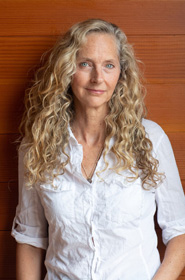 Mia grew up in Massachusetts and received a B.A. in English literature from the University of North Carolina at Chapel Hill and an M.A. in creative writing from Syracuse University. She has taught English and creative writing at several universities and high schools.

King’s first novel, The Pleasing Hour (1999), won the Barnes and Noble Discover Award and was a New York Times Notable Book and an alternate for the PEN/Hemingway Award. Her second, The English Teacher, was a Publishers Weekly Top Ten Book of the Year, a Chicago Tribune Best Book of the Year, and the winner of the Maine Fiction Award. Her third novel, Father of the Rain (2010), was a New York Times Editors Choice, a Publishers Weekly Best Novel of the Year, and winner of the New England Book Award for Fiction and the Maine Fiction Award.

King's fourth novel, Euphoria (2014), was inspired by events in the life of anthropologist Margaret Mead.[1] It won the inaugural Kirkus Prize for Fiction[2] and the 2014 New England Book Award for Fiction,[3] and was a finalist for the 2014 National Book Critics Circle Award.[4] Euphoria was listed among The New York Times Book Review's 10 Best Books of 2014,[1] TIME's Top 10 Fiction Books of 2014,[5] and the Amazon Best Books of 2014.

King is the recipient of a MacDowell Fellowship and a Whiting Award. Her short fiction has appeared in literary magazines, including Ploughshares and Glimmer Train, as well as in anthologies.